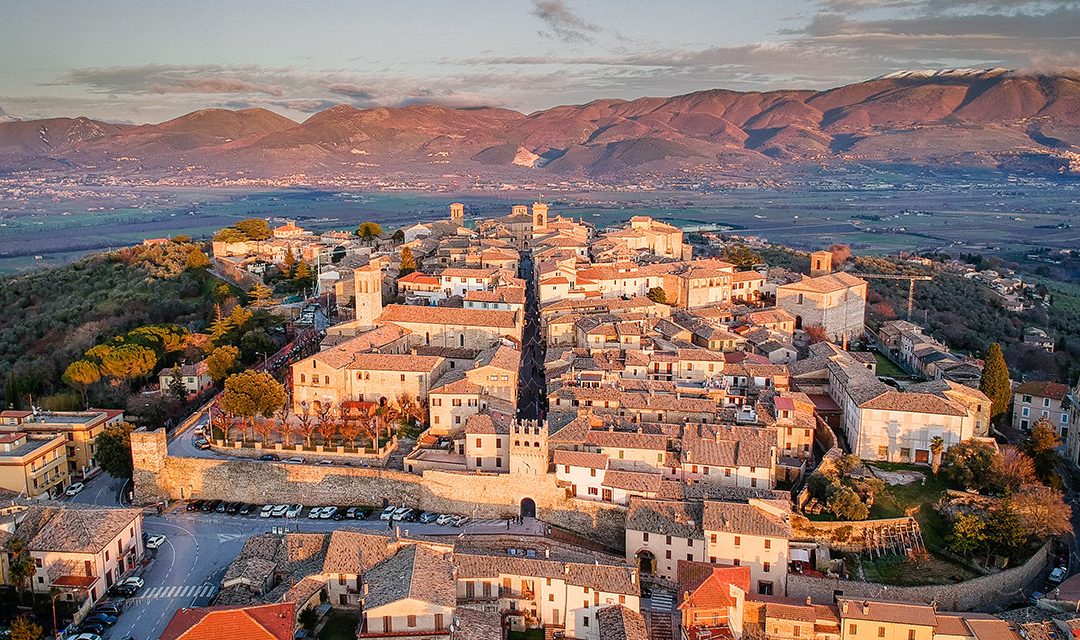 Montefalco, his history and useful tips…

Montefalco is situated in the middle of the Clitunno and Topino Rivers valley. Thanks to its position it offers a breath-taking view of the Umbrian landscape. That is the reason why Montefalco is often called “the Balcony of Umbria”. The town is an essential point of reference to get in touch with Umbrian art, for instance the Church of St Francesco, constructed for the Minor Friars between 1335 and 1338. It hosts a museum that has three exhibition spaces: the former church, known for the frescoes by Benozzo Gozzoli (1450-1452) which depicts the life of St Franscesco and where there is also displayed a Nativity by Perugino (early XVI century); the Art Gallery with works by the Umbrian School Painters (1300s – 1700s); the crypt with archaeological findings and sculptures.
The thirteen-century walls surround the town. They are still in good order after the 14th century restoration work by Lorenzo Maitani. The Medieval layout of Montefalco is dominated by the Church of St Agostino with frescoes by Ambrogio Lorenzetti and Bartolomeo Caporali.
The main square of the town is Piazza del Comune. It offers a concentration of aristocratic palaces (for instance, Santi-Gentili Palace) dated back to XV – XVI century. You can pay a visit to the Romanesque Church of St Bartolomeo and the Church and Convent of St Chiara with XIV century paintings by the Umbrian School. Nearby you find the Church of St Illuminata (XVI century) with side niches frescoed by Franscesco Melandio and the Covent of St Fortunato (XV century) that hosts frescoes by Benozzo Gozzoli and Tiberio d’Assisi.

THE “SAGRANTINO WINE ROUTE”
The Montefalco district is part of the food and wine itinerary of the “Sagrantino Wine Route”, one of the most prestigious wines produced in Umbria. The name “Sagrantino” comes from the Latin word sacer. It was a sacred wine for the Christian celebrations and it was a symbol that marked the rhythm of rural life. Around the middle of the last century it was made into wine and bottled.
On a walk through Montefalco, among its walls and along the paths that descend from Piazza del Comune, you will be surrounded by gardens and domesticated vines. Inside the St Chiara Convent a visitor can find Sagrantino vines that are several centuries old. The “Rosso di Montefalco” wine comes from the slopes of Martani hills, a renowed winemaking region since ancient Roman times. That land is still rich in wood, vineyards and olive trees. So a tourist should make a trip through this territory among wine cellars, oil mills and artistic treasures.
If you decide to come here in August you can’t miss the historical re-enactment of the “Fligh of the Ox” (= Fuga del bove) with the four neighbourhoods of Montefalco ready to challenge each other.