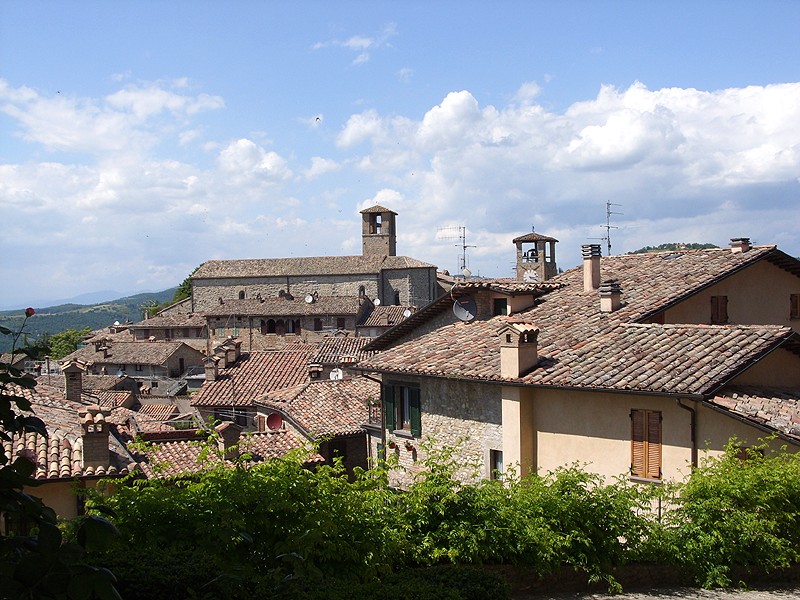 What to do on holiday in Gubbio? We suggest a small trip, just 40 minutes away.

The history of Montone begins in the 9th century. It is deeply connected with the vicissitudes of the Fortebraccio family that ruled the territory. In 1220 the Fortebraccios decided to overcome the struggles for controlling the area disputed among Perugia, Gubbio and Città di Castello in a political and peaceful way. The family ceded all of its possessions to Perugia and it received the title of “Perugia Nobles” and other privileges in exchange. In 1368 the most famous proponent of Fortebraccios was born in Montone: Andrea, later known as Braccio da Montone who became one of the most celebrated leaders. After his death and various vicissitudes Montone was subject to the rule of the Church. After the birth of the Kingdom of Italy it became an autonomous municipality once again.
THINGS TO DO
In Montone the most artistically interesting building is the Gothic Church of St Francesco (XIV century). It has got a single nave and a polygonal apse. There are several Umbrian frescoes inside, some attributed to Bartolomeo Caporali, and fascinating wooden sculptures. The church also hosts the Museum of St Francesco where it is possible to admire paintings, silver and sacred vestments of great artistic value. On the ground floor there is the Ethnographic Museum with over 600 items from Eastern Africa.
From Fortebraccio Square you can reach the highest point of Montone where you find the ruins of Braccio’s Fortress, destroyed by the will of Sistus IV in 1478. On its ruins there is now the former Covent of St Caterina that hosts the Municipal Historical Archives, one of the most important in Umbria for its extensive collection of documents.
Another significant religious building is the Church of St Maria and Gregorio, built in 1310 AD and restored during the XVII century. Every Easter Monday the “Holy Thorn” Relic is put on display. It is inside a chiselled silver reliquary (1635). Another place dedicated to St Gregorio is the Old Parish Church built in about 1000 AD in Romanesque-Byzantine style. It has rebuilt in XVI century and it has frescoes from the Umbrian School. Just outside the centre a visitor finds the Aries’ Fortress, an imposing castle which has been returned to its ancient splendour by restoring work.
In October and November you can’t miss the annual “Wood Feast” to welcome and celebrate the autumnal season.