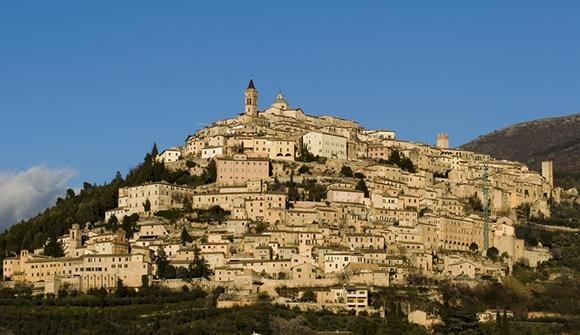 Trevi is located between Foligno and Spoleto. As the majority of the Medieval local village it dominates the plain where the river Clitunno flows.
Trevi has an ancient origin. Latin authors classify it as an Umbrian settlement. The recent discovery of an epigraph seems to confirm it. By the way thanks to several findings, it is possible to confirm that some prehistoric civilisations settled in this territory.
During the Imperial Age Trevi got great importance because of the Flaminia road. So a real civitas developed around the flat area of Pietrarossa. Nowadays there are still numerous remains of Pietrarossa’s monumental structures such as an important fortress with strong walls (I century BC). In olden times Trevi had jurisdiction over most of the nearby valleys (until Martani Mountains) and over a lot of local mountainous villas. From the beginning of the II millennium the diocese and the Longobardic administrative constituency were based here. At the beginning of the XII century Trevi became a free municipality. In 1438 it joined the Papal State following its fortunes until the Italian Unification.
During the Middle Ages and Renaissance Trevi had its best years (it was called “dry harbor”, “porto secco”) and a dynamic cultural life. Between 1469 and 1470 one of the first “Monti di Pietà” and the fourth Italian printing house opened here. In 1784 Pope Pius VI gave Trevi the qualification of “city”.
The Church of St Emiliano (XII century) is one of the most significant monument here. It has three decorated apsides and bows on shelves. Inside there is the well-refined Altar of the Sacrament by Rocco da Vicenza (1522).
You can also visit the Gothic Church of St Francesco with its frescoes dating back to the XIV-XV century. And the Art Gallery in the Town Hall where it is possible to admire paintings by Pinturicchio (“Virgin Mary” and “The Coronation of Queen Mary of Spain”).
The Sanctuary of Madonna delle Lacrime (1487) with a fresco by Perugino and the Romanic Church of San Pietro a Bovara are a short distance from Trevi.