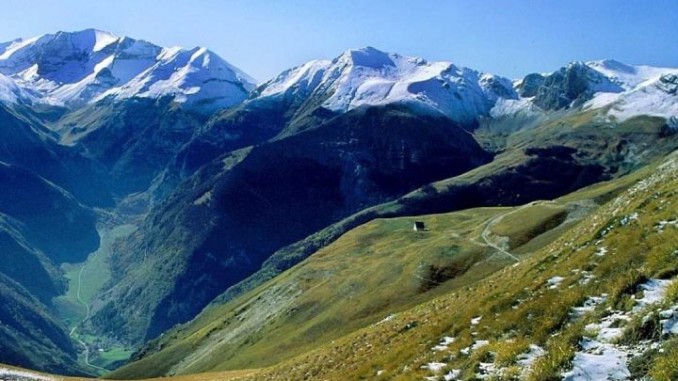 What to do on holiday in Gubbio? We suggest a small trip, just an hour and half away.

Monti Sibillini Park represents an unmissable occasion to live the wonders of the past in full and to discover a unique, natural, wild but often hostile environment. A travel experience in this area leaves the visitor with unforgettable emotions.
Monti Sibillini Park comprises the most elevated mountainous group in the Umbro-Marchigiano Apennines. Its highest peak is Mt Vettore. It reaches 8, 132 ft above sea level.
The town of Visso, the National Park actual seat, is a most worth visit. It is characterised by a picturesque historic centre. Legend tells that this Umbrian community was founded 907 years before Rome. Once it was recognised as a free municipality, it was divided into five district called Guaite until the Napoleonic invasion.
The sanctuary of Macereto is near Visso and it is located at a height of 1000 m a.s.l., in an Eden-like area. This religious complex lies where the Castle of the Earls of Fiastra once stopped. It is an exemplar of the highest expression of the 1500s Renaissance architecture of the Marche region.
The visitor can reach Lake Fiastra moving inland along the River Nera. Although Fiastra is an artificial lake, its waters are of a crystalline blue so that reflect the surrounding mountain tops in every season. From here you can get to the suggestive Acquasanta Valley with its astonishing waterfalls and the “Grotto dell’Orso” (Bear Cave).
Not far away a visitor can take a tour of Gole della Valnerina, gullies that were dug by the erosion from the River Nera and the massif Mt Bove, resembling a Dolomite summit.
Because of the particularities of its location, Arquata del Tronto is the only municipality in Europe whose territory is composed by parts of two different National Parks: Sibillini Mountains in the North and Gran Sasso and Laga Mountains in the south (the beginning of Abruzzo Region).
Norcia is the heart of an important section of the Monti Sibillini Park. It is the land of Europe’s Patron Saint, St Benedetto, and it is also famous for its lovely historic centre.
Preci is a centre of spirituality. It hosts the beautiful St Eutizio Abbey, founded in 470 BC
Trekking is the favourite activity in this territory. It is made easy with marked trails and guided tours like that known as “dello Zafferano” because it was the ancient route travelled by those that brought saffron from Abruzzo.
Rock-climbing is also spread, mostly on the northern slopes of Mt Bove. Because of its morphology and unique environmental conditions as shaped by the atmospheric currents, the Park is a heaven for hang-gliding and paragliding.
The area around Forca Canapine is great for rafting and canyoneering and skiing in the winter season.
Mountain bikers can moreover explore the numerous and suggestive parts of the park by way of marked bike paths.
Several myths regard the Sibillini territory. These mountains were actually well-known since Medieval times as a land of demons, necromancers and fairies. The most famous ones are those linked to the Prophetess Sibyl (who is said to have lived in a cave on the homonymous Mt Sibilla) and to Pilate, the Roman solicitor whose body was dragged through the waters of the “demonic” lake by buffaloes. The lake is in one of the highest valleys of Mt Vettore. You can’t miss the moonlike landscape of that area. You can reach it in a four-hour itinerary from Frontignano.
The lentil of Castelluccio of Norcia is a typical product from the Castelluccio plains. It is marked IGP (for Protected Geographical Indication). You can taste the lentils simply stuffed with water, celery, garlic, salt and pepper.